Novak Djokovic is certainly no stranger to media attention and scrutiny on his performance on the tennis court, but yesterday he faced a new kind of attention: a focus on his legal team’s performance in the court room. With uproar from the nation of Serbia, claims of unfair imprisonment and the threat of imminent deportation of an international tennis star, it’s safe to say that all eyes and ears were tuned into the decision of Judge Anthony Kelly yesterday afternoon.

The Temporary Activity Visa (subclass 408) is generally used for participation in Government endorsed events. It is a visa which grants you temporary entry to Australia, on the basis that you have specific skills to undertake a government endorsed activity, are supported, or sponsored and meet the requirements of your specific stream. In the sporting stream of the visa, you are permitted to participate in high level sporting organisation events, and can apply for the visa in or outside Australia, but not in immigration clearance. In order to be eligible for the visa, you must meet certain character, health, and skill requirements, and must meet COVID-19 vaccination requirements as set out by the federal government.

The timeline leading up to Court

As world number one Novak Djokovic fronted the Federal Circuit Court yesterday to plead his case for why the decision to cancel his 408 Temporary Activity visa should be overturned, you might have been wondering how he ended up in this situation in the first place.

It is reported that Djokovic was granted a subclass 408 Temporary Activity visa on November 18 of last year, presumably under the Sporting Activities stream. On November 29th, Tennis Australia’s chief Mr Greg Tiley received communication from Federal Health Minister Greg Hunt setting out the requirement that players who wished to enter Australia quarantine-free had to be fully vaccinated and could not rely on a previous COVID-19 infection as grounds for an exemption.

On December 30, Djokovic reportedly received a letter from the Chief Medical Officer of Tennis Australia stating he had been granted a “medical exemption from COVID vaccination” on the grounds that he had recently recovered from COVID-19, and subsequently on January 1st, received an automated online confirmation that he had met the requirements for travel to Australia without the need to quarantine upon arrival.

Upon his arrival to Melbourne from Dubai late on the 5th of January, Djokovic was detained by border officials, interviewed, and handed a decision at 7:42 am that his visa had been cancelled. From then until around 5:30pm on the 10th, Djokovic remained in immigration detention at the Park Hotel in Melbourne.

At 5:17 AEDT, Judge Anthony Kelly announced that the decision to cancel Novak Djokovic’s visa would be overruled, in a minute agreed to by both the government and Djokovic. The government was ordered to pay legal costs, to release Djokovic from detention within 30 minutes and return his personal effects to him.

It was noted by the tennis stars legal counsel that “He had done absolutely everything that he understood, was required to enter Australia” and that “any reasonable person” in the star tennis player’s case would have thought they had “ticked every box” regarding visa entry requirements into Australia.

Judge Kelly queried what more tennis star could have done to prove vaccination exemption, and ultimately the government acknowledged it didn’t give Djokovic enough time after notifying him of the intent to cancel his visa to seek legal advice and respond fully.

As the court never ruled on the question of the validity of Djokovic’s claim that his prior COVID-19 infection served as a valid reason to have a medical exemption to been unvaccinated, this issue is far from over.

Serbian Prime Minister Ana Brnabić spoke with Scott Morrison over the phone, emphasising “the importance of the conditions for training and physical preparation for the upcoming competition” as this sporting issue increasingly becomes an issue in the political sphere.

Government counsel highlighted at the conclusion of legal proceedings yesterday that the immigration minister, Alex Hawke, will consider whether to exercise a personal power of cancelling the visa. That means that once the decision is revoked, Hawke could re-cancel it, on the basis of section 133C(3) of the Migration Act. If that happens, Djokovic would once again face court and would risk being banned from Australia for three years if the minister decides to cancel the visa.

“In a view, the stakes have risen rather than receded,” Judge Kelly remarked.

Djokovic will now be able to play in the Australian Open, if Hawke doesn’t decide to exercise his power before Djokovic hits the court.

Further allegations have arisen regarding the possibility that Djokovic lied on his Travel Declaration form by allegedly failing to declare a trip to Spain 14 days before arriving in Australia. Videos have emerged from the Soto Tennis Academy in Spain showing Djokovic training on the 2nd of January, which casts doubt on his declaration on the document.

Another issue which Djokovic remains in hot water over is attendance at events whilst positive with COVID. In court, it was revealed by his lawyers that Djokovic tested positive on a PCR covid test on December 16, but the tennis star was pictured on December 17, maskless at a tennis players award ceremony.

It is important for us to remember that Djokovic’s status has played a key role in attracting attention to his “restrictive” living conditions. We should be implored to question why 70 refugees have been left to live in such conditions for the last 9 years with little progress on their cases. Further to this, we should consider the plight of some 80 million displaced and stateless people of the world, who often have no voice and no person to advocate on their behalf. 32 refugees and asylum seekers reside in the Park Hotel alone, a hotel which has been described as “cruel”, a “coffin”, an “aquarium”, a “torture centre.” We cannot continue to overlook their suffering or fail to advocate for the asylum seekers and refugees in immigration detention on our shores.

BREAKING NEWS: Judge Anthony Kelly has just handed down his decision to overturn the cancellation of Novak Djokovic’s 408 Temporary Activity Visa. As we await news of the tennis stars next steps, a more in-depth explanation of his case and the subclass 408 Temporary Activity visa can be found on our website, LinkedIn and Facebook pages. 🎾 🌎

If you have any queries about the Temporary Activity (subclass 408 visa), its requirements or are ready to take the first steps to start your own visa journey, contact Emerson Migration Law on (07) 3211 4920 or visit our website at emersonmigrationlaw.com.au 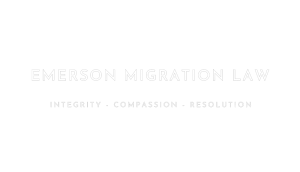